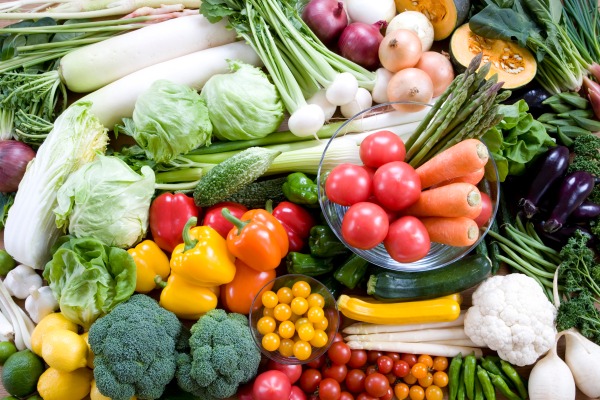 Food that warms the body, food that cools the body

We are having a hot summer this year as well.
It is important how to regulate the body temperature in this season when the body gets too hot and there is a concern about heat stroke.
There are several ways to prevent your body temperature from rising too high in the hot summer, such as wearing light clothing, drinking water frequently, and putting cold food on your neck, but you should include food that cools your body in your diet. Have you ever tried to take measures against the heat?

There are two types of food, one that warms the body and the other that cools the body.

Foods that cool the body include lettuce, cabbage, Chinese cabbage, spinach, Japanese mustard spinach, cucumber, tomato, eggplant, bitter gourd, celery, sprouts, okra, and radish.
These have something in common and are not all, but they are vegetables that can be grown on the ground, and are seasonal vegetables in summer, and are characterized by their white, blue, and green colors.
On the other hand, foods that warm the body include carrots, green onions, onions, burdock roots, lotus roots, pumpkins, ginger, garlic, garlic, yams, butterbur, and konnyaku.
What they have in common is that they are vegetables that grow under the ground, and are seasonal vegetables in winter, and are characterized by their black, red, and orange colors.

When I first got this knowledge, I remember being deeply impressed that it made a lot of sense.
Vegetables produced in winter have the effect of warming the human body, and they grow in the ground so as not to let the temperature of the vegetables escape, while vegetables produced in summer have the effect of cooling the human body. Yes, it grows on the ground to let the temperature of the vegetables themselves escape by exposing them to the outside air.

I was impressed and told the people around me.

However, these laws are not perfect and there are exceptions.
For example, tomatoes.
Although tomatoes are red in color, they are classified as chilled foods because they are native to the hot regions of South America. Chinese cabbage is in season in winter, but it is a chilled food because it is a green vegetable.
I don’t know why, so I generally remember that summer is the season, vegetables grown on the ground have the effect of cooling the body, and vegetables grown in the ground in the winter have the effect of warming the body. ..

Similarly, some fruits have a warming effect and some have a cooling effect.
This is about the same in that it makes sense.
Fruits harvested in cold regions have the effect of warming the human body, and fruits harvested in hot regions have the effect of cooling the human body.
The way to remember is the same, isn’t it?
Apples, grapes, cherries, oranges, figs, apricots, peaches, and prunes are fruits that warm the body.
Bananas, pineapples, mangoes, watermelons, oranges, lemons, grapefruits, kiwis, melons, and pears are fruits that cool the body.
Apples are Aomori, Aomori is cold, so it’s a fruit that warms the body, and mandarin is Shizuoka, Shizuoka is hot, so it’s a fruit that cools the body.

With this kind of knowledge, it may be a good idea to devise a daily diet.

However, it’s important to note that it’s not that you shouldn’t eat vegetables and fruits that warm your body because it’s a hot summer.
Some people are cold even in the summer.
I tend to get cold because I am cold, so I may try to reduce the amount of food that cools my body even in the summer, and vice versa.
By having this kind of knowledge, you can make a sense for your daily meal menu.

It’s interesting to be able to warm and cool your body with meals.